The most recent resource boom in Australia has by most measures been the biggest. The prices we receive for our exports relative to our imports, the terms of trade, reached never-before-seen heights. Furthermore, the boom ran longer than any preceding it. 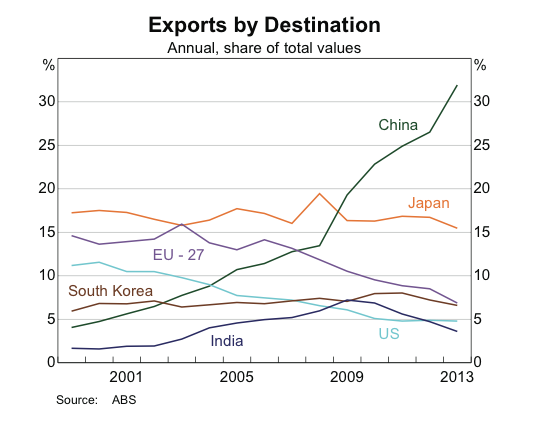 And greatly accelerated the evolution of the industrial composition of the economy, with manufacturing’s share of output now among the lowest in the OECD. 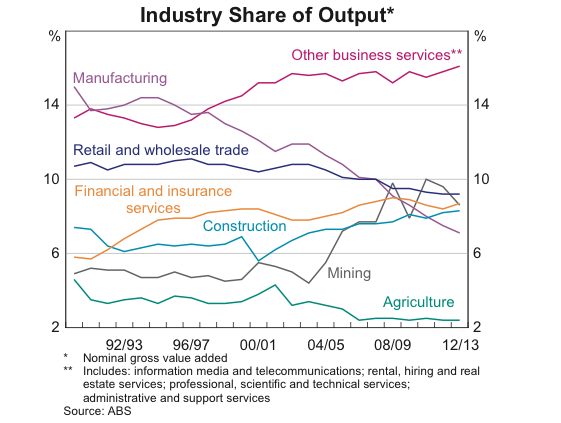 The cornucopia was at its fullest in 2011, and since then the trend in commodity prices has been down… 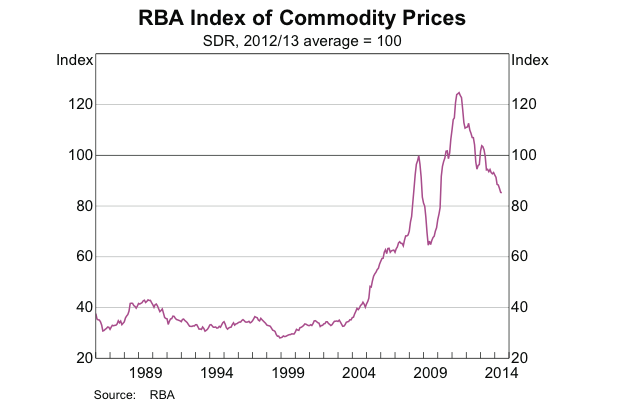 …led by iron ore and the coals, which together account for roughly 35% of Australia’s exports.

Australia has witnessed enormous investment into its commodity sectors, raising output of key exports; we are right in the thick of the supply expansion stage.

This dizzying surge in export volumes is regularly adduced to assuage concerns around lower prices. However, if we consider iron ore, it must be remembered that the recent price decline (over 35% this year in AUD-terms) has largely been a consequence of increased supply. If Chinese demand cools materially, the combined effects of rising supply and falling demand risk another more serious leg down in prices. At that point, increasing supply may well be self-defeating (though there are undoubtedly industry-specific strategic factors to consider).

That the boom will pass is something of a truism; in the long run, all commodity booms are dead. The issue for Australia today is whether the adjustment is gradual and orderly, giving us time to adjust our economic settings, or whether it happens in a hurry, with our naked bodies left embarrassingly exposed by the receding tide.

Of course, this process has certainly already begun. Thus far, however, the timidity of a clique of cadres in Beijing has deferred a more serious correction emanating from China. At the same time, Australia has made progress shifting its growth drivers away from mining, towards other sectors. Mostly, housing is picking up the slack. While the uplift in residential construction is welcome, the surge in house prices is less so, and is likely compounding the risks that have been brewing to our north for the past couple of years.

All charts courtesy of the RBA