The economic fate of the world’s inhabitants is remarkably beholden to the trajectories of its key interest rates. Of these, the apex rates are those on US government debt securities. Considerable (though far from absolute) influence is exercised the over these rates by the Federal Reserve, and thus rivers of ink are flowing at present in service of the question, When will the Fed adjust the target federal funds rate?

The answer may not be as momentous, but we’re asking a similar question in Australia. Picking the path for the RBA’s cash rate is a prime task for any would-be economic forecaster, as it’s both a key indicator of economic conditions as well as a critical determinant of them.

Presently the cash rate sits at 2.5%. This is generally reported as being the lowest on record. It certainly is since inflation targeting was gradually adopted in the early 1990s, the period over which comparisons are most relevant. 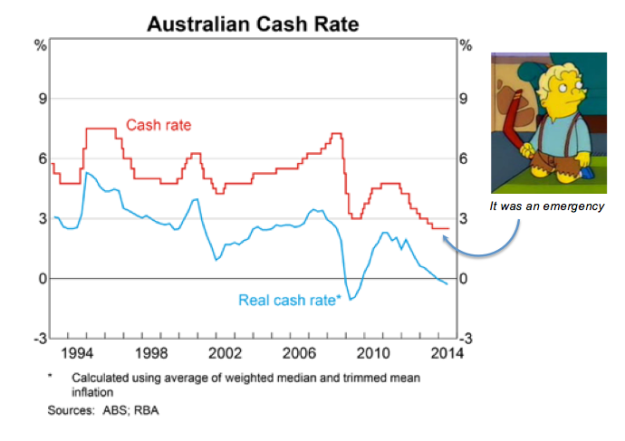 Last week Tim Toohey of Goldman Sachs caved and discarded his 2014 rate cut call. That leaves industry forecasters in unanimous agreement (so far as I am aware): the RBA is not cutting interest rates again. Time to fix those mortgages!

So if no more cuts, when will the RBA hike? AMP, CBA, Barclays, HSBC, and St. George reckon Q1 next year. Citigroup and ANZ think Q2. Westpac and JPMorgan are eyeing Q3, and Deutsche Bank thinks not before 2016.

The RBA is evidently happy to maintain its inaction for a while yet, reiterating in the last monetary policy statement that “the most prudent course is likely to be a period of stability in interest rates.” Such tranquillity is unusual. Indeed, if we make it through to April next year, it will mark the longest period absent a change in interest rates we’ve ever known.

In a country like Australia, changes to interest rates tend to be quite effective in influencing economic conditions. Lower rates stoke borrowing, asset prices and consumption, giving way to higher rates, and vice versa. Why then are we drifting across a calm blue ocean of low interest rates?

Primarily due to the uneasy schism that has emerged in our economy. On the one hand we have the descent from what has almost certainly been the biggest terms of trade/investment boom in our nation’s history. On the other we have a raging house  boom. Which force prevails in this struggle will determine the short- to medium-term direction of interest rates.