…and the Lords giveth again

Just as you were thinking the central bankers’ levitation elixir was looking a little drained after the conclusion of the Fed’s QE program, the Bank of Japan has come out with a big surprise, adding to its own QE program. Full release. Basically, the recovery is lumbering along but price pressures remain weak, and so the BOJ narrowly voted to raise its asset purchases. 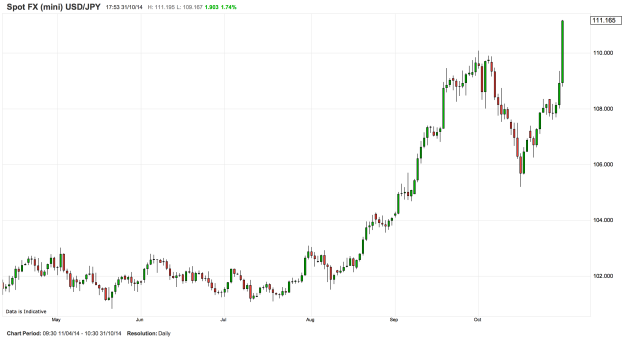 And, of course, not just in Japan, with the S&P surging right to its all-time high before easing back. 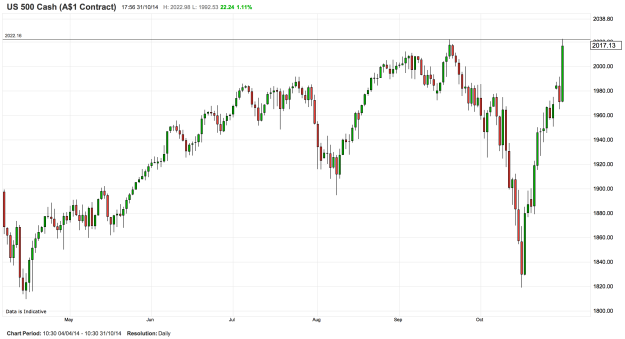 A persistent theme on this blog has been the absence of any significant inflationary pressures globally. Japan has more experience with the challenge of deflation than any other major economy, and in 2012 decided it would at last meet this head on with a vigorous quantitive easing (money creation) program. The mere promise of this sent the yen tumbling (USDJPY rising means the yen is falling against the dollar). 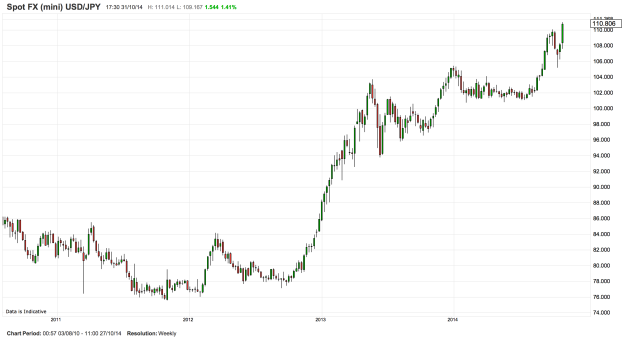 And the Nikkei to the moon.

In April 2013, the BOJ announced the details of its much-anticipated easing initiative, and did not disappoint. It committed to doubling the money base, adding around 130 trillion yen over 2 years, with the aim of pushing the inflation rate above 2% within that timeframe. This announcement provided the impetus for a continuation of the moves in currency and equities markets, but then over the subsequent 12 months the yen was mostly flat against the dollar, settling at the 102 level this year (until the resurgent USD broke the tranquility).

This massive currency deprecation managed to drag price changes into positive territory, but persistent and sustained inflation has nonetheless remained a challenge. Japan introduced a sales tax hike this year, as part of a reform agenda to improve the government’s dire fiscal position, which obviously added to price pressures. After allowing for this artificial boost to consumer prices, the inflation rate is barely half of the BOJ’s target, which explains today’s decision.