I’ve had a negative view on gold for some time, which stemmed naturally from an uncontroversial bullishness towards the USD.

Gold threatened support at $1180 earlier this month, but did not break it. At the time, I wrote that this was a “garden variety technical pattern which often would be interpreted as a bullish signal, but that’s certainly not how I’m looking at this market.”

Despite noting room for a short-term bounce, my negative view of gold was reasoned thusly:

The entire ‘buy gold because the Fed is printing money, stoking inflation and trashing the dollar’ theme has been unraveling since early last year, as it became clear that QE would end with no inflation in sight and the dollar outperforming, rather than collapsing. Depending on the severity of the equities downturn and the follow through on the dollar, I’d be looking for gold to break $1180 by the end of the year, heading below $1000 in fairly short order.

I wavered a little on the timeframe during the last few weeks, as the risk increased of dovish concessions from the Fed. But this week’s Fed meeting dispelled those market musings, and gold has been clobbered accordingly. 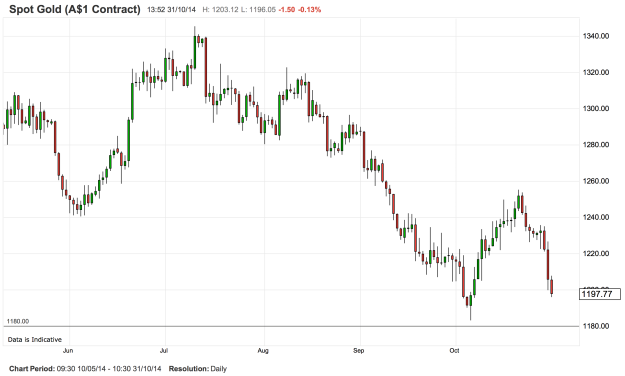 Looking perhaps a little oversold on the the dailies, but support at 1180 is now firmly in the crosshairs. Should it break, my more aggressively bearish outlook on gold would be in play.

One point I highlighted in that discussion on gold earlier this month was the support which an equities sell-off would provide gold. As you can see, gold moved in inverse lockstep with the S&P this month.

Spiking volatility, signifying heightened risk aversion, typically favours gold. Thus the emphatic equities rebound (which I should say has so far made a mockery of my concerns of a more turbulent end to QE; question now is if it can establish and hold a new high), and the calming of market nerves, has also hurt gold.

The rout has deepened as the mighty USD dispatches all challengers.

On a longer timeframe we can see that the current breakdown is reminiscent of the 2013 collapse. We shouldn’t read too much into these kinds of patterns but the overall environment for gold is heavily bearish, and obviously I’m looking for substantial downside here.

The unstoppable dollar makes a gold rally hard to come by. Inflation is going to be turning hard south if the USD holds and extends its recent gains (bearing in mind that its looking rather overbought against the yen). Yields will remain subdued. The only friend gold has really is the Fed; a decidedly more dovish tone from the Fed is required to rescue gold in the near term, and the prospects of that appear remote.