A couple of weeks ago I posted a piece which was mostly concerned with the re-emergence of volatility in markets.

In it, I noted that the S&P500 had breached what was surely the most-watched trend line in the world, and looked poised for a deeper sell-off. 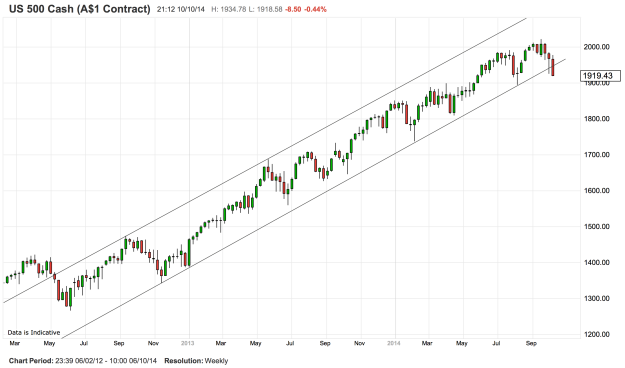 A deeper sell-off we got, but a prolonged one we certainly did not. 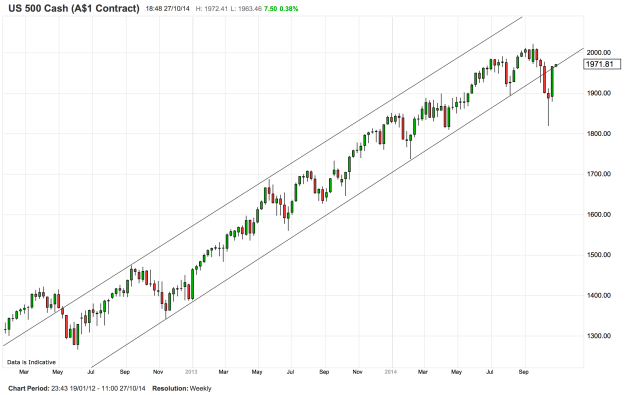 That violent whipsaw has seen S&P reclaim the trend, if only just. The VIX has accordingly been smacked down just as quickly as it rose (though it remains elevated relative to recent extreme lows).

So, was that the little vol episode over and done with? Can we get on with the smooth rally again now?

We shouldn’t be quite so hasty. As you can see on these charts from Elliot Clarke of Westpac, the aftermath of the previous conclusions of QE ushered in significant volatility. 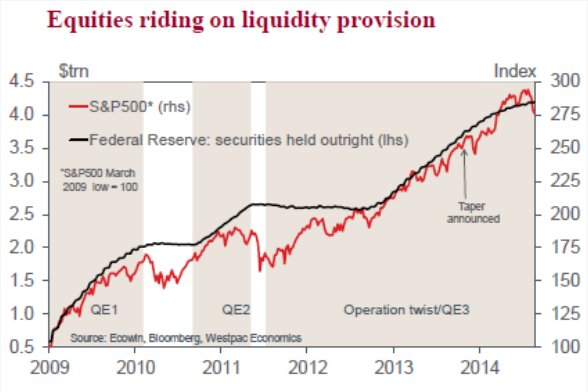 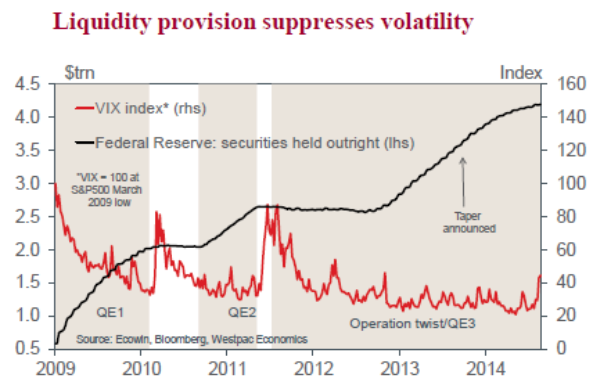 The title of that second chart, I might add, speaks a most important truth. Quantitive easing is colloquially known as money printing. For something to be considered money, it requires certain attributes, most commonly that it’s a store of value, a unit of account and a medium of exchange. The last of those is where the QE hits a snag. The Fed cannot legally create money and exchange it for anything other than financial assets; it creates liquidity and uses it to purchase government bonds and asset-backed securities from commercial banks. In so doing, those banks see a decline in bonds on their balance sheet and an increase in reserves. The Fed would like those commercial banks to then lend those reserves out into the economy and stimulate economic activity, but for the most part they have not.

Much of this new ‘money’ being created by the Fed through its QE programs is therefore sitting idly in its virtual vaults. That being so, how does QE affect asset prices aside from those that the Fed is actively transacting in? (Government bonds and ABS.)

The main channel is the suppression of volatility. Through its Permanent Open Market Operations (QE), the Fed becomes a giant, regimented provider of liquidity in bond markets, thereby reducing interest rate volatility. This naturally then flows into other markets. Part of this process is direct, by virtue of the Fed’s participation in markets, and part of it occurs as a result of the general shift in market psychology: participants believe that the QE lowers volatility, meaning they transact less, driving down volatility further. Participants believe that others believe this, and so on and so forth.

In my view, it is the decline in volatility that is the critical channel through which QE supports asset prices, especially equities; more so that lower yields. Risk is not confined to the variance of returns, but that is a key measure used in the market. Lower variance of returns encourages risk-taking, driving up risk assets such as equities. (The steady rally in equities is of course itself reflected by even lower volatility, so the process is self-reinforcing. This works in reverse when volatility starts to rise.)

The key now is whether the S&P can hold on the trend line, and carry global equities in the process. Recommending equities this time around is that the US economy is in unquestionably better sharp than it was at the end of either of the last two programs, and that the fed funds rate isn’t actually going to rise for some time yet. Nevertheless, rather than signalling an abrupt end to this latest volatility episode, I’m still of the view that major asset markets will experience significant ructions over the next few months, unless the Fed surprises on Thursday by delaying the end of its bond buying program or substantively prolonging the expected timing of its first rate hike. Likewise, a big surprise from the ECB with respect to its own QE program would also be supportive of more relaxed market conditions.

A bond bear market or a dollar bull market?

There was one other thing I wanted to discuss, which is the likely trade-off between a bear market in bonds and a bull market in the USD. The former was widely expected to arrive with the end of QE, the strengthening of the US economy and the eventual normalisation of short-term US interest rates. The Fed buys US government bonds as part of its QE program, thus the providing demand. When this demand is removed from the market, so the common view held, bond prices would decline and yields rise. Supporting this view was the violent sell-off in bonds that accompanied the announcement last year that the Fed would ‘taper’ its bond-buying program (in late May). 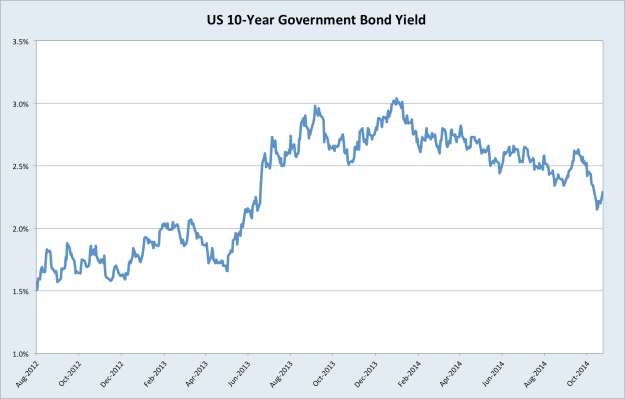 Alas, this year, and in spite of clear indications of economic improvement in the US, especially in the labour market, yields have been trending down. In the last couple of months this movement was especially pronounced. The chart above significantly understates the intraday volatility the week before last, since it only captures daily closes. At one point, yields fell below 1.9% as bond bears stopped out en masse.

Part of the reason for this slump in yields (rally in bond prices) has been the ongoing absence of inflationary pressures globally, which if anything seem to be abating further. Economic recoveries are typically associated with rising inflation, which makes bonds less attractive. Tepid inflation has therefore supported bonds. Europe is flirting with deflation, Japan is battling to maintain what little inflationary momentum was generated by its sizeable currency depreciation, and China’s chronic overcapacity encourages to its ongoing export of ‘disinflationary’ pressures (see steel, for instance). Adding to this has been the sharp decline in oil prices, which is inherently disinflationary, although not of the sort that demands a monetary response.

Throw a strong USD into this mix and the US is going to find it extremely hard to lift inflation into a range that warrants ‘normal’ interest rate settings. So if the USD continues to rally, I find it very hard to see a trending bear market in bonds. The only thing I can really imagine that would facilitate a simultaneous USD bull market and bond bear market would be another credit boom, to support US demand and prices (particularly wages, which are more or less flat real terms), to such a degree that the strong dollar does not completely quash inflation.

There’s probably something I haven’t considered there, but it’s an interesting scenario to ponder, I reckon.