It may not be apparent from its serene outer appearance, but a constant battle rages at Strayanomics between thoroughness and brevity. I would like any argument I make to be as well-supported as possible, but the detail this demands can be excessive. Unfortunately, attempts to keep a post as short and timely as possible risk inaccuracies, especially as this blog is a personal learning exercise as much as anything.

So it was with my shallow treatment of consumption spending in the interest rates update for October. In it, I wrote:

A large part of the why the housing boom has not had the wider economic impact one might have expected is that households have been reluctant to respond to higher net worth in the usual manner of saving less and spending more.

Whatever the cause, consumers have chosen to remain stubbornly parsimonious in the face of rising wealth. Until they throw caution to the wind, there is little in the outlook for consumer spending to recommend higher interest rates.

I based this observation on two pieces of evidence: the national savings rate and retail sales data, which at first glance wasn’t unreasonable. The savings rate remains elevated:

And, notwithstanding a jump into Christmas last year, national retail sales growth has been notably weaker than in previous periods of strength in the housing sector (2001-2004, for instance). Momentum has also clearly been lost in 2014, despite ongoing strength in housing. 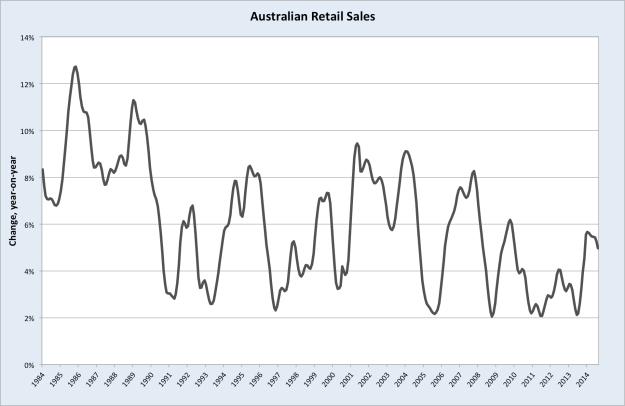 The problem was that I extrapolated out some mysterious shift consumer behaviour from these data, which wasn’t really justified.

I have highlighted a number of times that the housing boom has largely confined itself to Sydney and Melbourne. 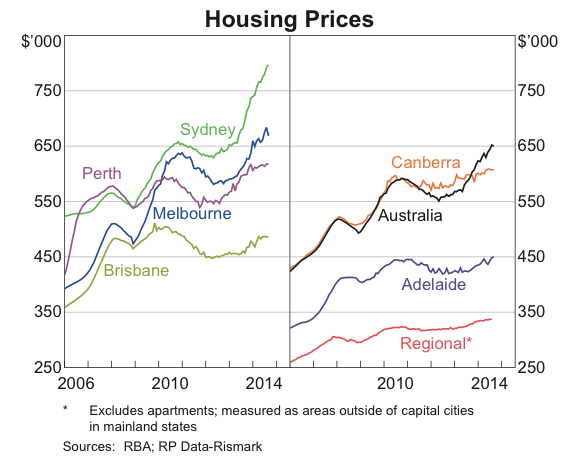 It should have come as little surprise then that consumption spending in NSW and Victoria has outpaced the nation as a whole. NSW has seen the largest increase by a long shot, mirroring the outperformance of house prices in Sydney.

In contrast, the mining states, along with perennial laggard, SA, have drifted below the national figure.

If we take a longer-term view of spending in NSW, we can see that the housing boom in that state has indeed had the impact one would expect.

There really isn’t anything mysterious about the apparent frugality of Australian households, nor what looked like their reticence to spend out of rising housing wealth. The national figures merely mask regional differences. In states that are experiencing the winding down of the mining boom first-hand, households are considerably more sparing in their purchases. In NSW and to a lesser extent Victoria, the booming capital city housing markets are raising consumption spending, pretty much in line with what you’d expect. Thus, the reason the housing boom has not had “the wider economic impact one might have expected” is simply because the boom has not been especially wide.

I might add, this doesn’t alter my narrative on interest rates, at least not at this stage. Firstly, it reinforces the picture of our bipolar economy (cyclical strength versus structural weakness, as outlined in the October rates post). Furthermore, it reminds us that low interest rates are critical to keeping Australia from sliding ever-closer to recession (or what will feel like a recession; substantially higher export volumes may shield us from recession in a technical sense). If the RBA hikes, we not only lose the momentum of housing construction, but we’re also likely to see growth in consumer spending cool materially as housing slows. Such is the bind our monetary technocrats find themselves in.